In 1977 Fleetwood Mac had the number 1 album in the country with rumors, the Dallas Cowboys won the Super Bowl beating the Denver Broncos, and it was the year Steve Driscoll started his journey thru the wacky world of broadcasting without a GPS. Steve says he has no regrets and wouldn’t change a thing. Steve started his career on a 5,000 watt junior college radio station majoring in radio and TV at Odessa College as a weekend announcer for monster top-40 station The Rig-14.  2 years later Steve joined the staff at midland Odessa’s first rock radio station which was 98-KUFO… a radio station created from scratch by three guys they were Kim Bengs, J. Michael Scott and Steve.  Later Steve joined Hot 102 fm. Steve was born in Juarez  Mexico as Steven Driscoll Hernandez the third but later shortened his name for social security purposes to just plain old Steve Driscoll.  Steve worked the El Paso radio market in 1994 at Y-96 FM El Paso’s leading country station and at Power 102 for a year but opted for Odessa-Midland in September of 94. I’ve been programming 102 in some form of Classic Rock since 1994. Classic Rock 102 is by far one of the best radio stations I have worked at as a program director and the air staff is solid too. Robert Hallmark of news talker 550 KCRS commented “hell Steve you’ve been around here since dirt!”  But in reality I’ve been here much longer than that!!   Seems like it was only yesterday, Steve was giving Abraham Lincoln his first bumper sticker. Following that story Steve commented with “Where does time go?”  Steve is on between 2pm-7pm weekdays at 102.1, Classic Rock 102. 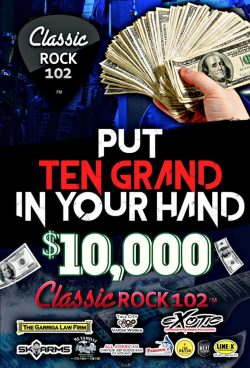